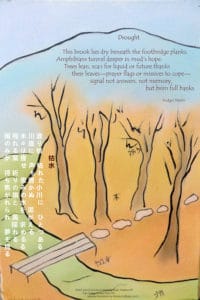 Rodger Martin’s new book, For All The Tea in Zhōngguó, 2019, follows The Battlefield Guide, (Hobblebush Books: 2010, 2013) and the selection of The Blue Moon Series, (Hobblebush Books:  2007)  by Small Press Review which was one of its bi-monthly picks of the year.  He is a New Hampshire State Council on the Arts (NHSCA) roster artist and a touring artist for the New England States Touring Foundation administered by NEFA. He has received an Appalachia award for poetry, a NHSCAs award for fiction, fellowships from The National Endowment for the Humanities to study T.S. Eliot and Thomas Hardy at Oxford University and John Milton at Duquesne University. His work has appeared in journals and anthologies throughout the United States and China where he also wrote a series of essays on American poetry for The Yangtze River Journal.

Susan Wadsworth earned a B.A. in art from Colby College with honors, an M.F.A. in painting from Cranbrook Academy of Art, and a M.A. in art history from Tufts in 1989. Her specialty is modern abstraction, both in her own work and in historical analysis. She began teaching at Fitchburg State in Massachusetts in 1992, moving to Rindge, NH, and retired in 2019.  As a professor, she taught studio art and art history: from modernism and the history of architecture to Asian art. She has exhibited her pastel works throughout New England and NY and is usually inspired by landscapes. For this broadside, she walked with Rodger Martin over the area that inspired his poem, although it was months later and much wetter. She has also studied some aspects of the Japanese language with Ritsuko Sullivan at FSU.

Keep in Touch with us!

Join our mailing list to receive the latest news, events, and other updates. We typically send 1-2 emails per month.

You have Successfully Subscribed!